This city was a booming coal town before World War II, is centered at the junction of KY 7 and 1086 and the confluences of Steele and the Right Fork of Beaver Creeks, 14 mi south of Prestonsburg. In 1913, on land acquired from Dan Martin, the Elk Horn Coal Company opened a mine and established the town, which it was named for then U.S. Senator Clarence Wayland Watson (1864-1940) of West Virginia, president of the Consolidation Coal Co. (1903-11 and 1919-28) and later president and chairman of the Elk Horn Coal Company.
Along the western edge of Wayland, and mostly within its boundaries, is the community of Glo, named for the Glogora Coal Company. The Glo post office operated from 1921 until 1955. 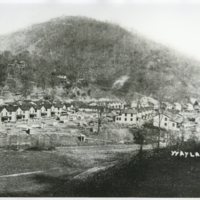