Picture 1: Alamander (Alka) Davis driving his yokes of oxen; pulling a steam boiler into the wilds of either Licking or Quick Sand. Davis was a contractor and drove oxen, horses, and mules.

Picture 2: Sitting with his favorite dog, Eisenhower. His son Raymond had given him a matched pair of coon hounds after the war, one named Eisenhower and the other named Patton. Davis was Maintenance Superintendent of Princess Elkhorn Coal's Camp at David at this time. 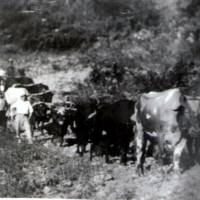 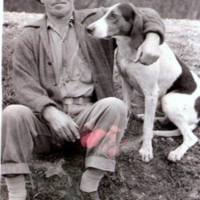