Davis was born on Right Beaver and died there, but led an interesting life, having twice walked out to Missouri with his uncles, the Riddles. He walked back both times, becoming dissatisfied. The second time finding that his parents had moved back to Virginia in his absence, leaving him to have to sleep out in the open. He felt safer sleeping in the trees, so that is where he set up residence. Alamander Coburn received word that a young stranger was sleeping in a tree on his farm, so he sent his son-in-law, a Combs, to see who it was. Joseph was invited to supper, and he ended up marrying Alamander's daughter, Sarah Coburn.

Joseph was the cause of the name "Pumpkin Center" at Estill when the superintendent of Elkhorn Coal saw a field of pumpkins Joseph had planted and said it was "the pumpkin center of the whole damn world". 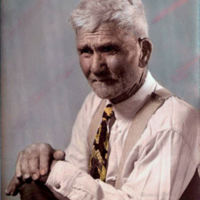