Pictures 1 and 2: Floyd Davis.
Davis enlisted in 1940 and had completed basic training before the war began. When Pearl Harbor was bombed he was shipped to Iceland to defend the North Atlantic Shipping Lanes so vital to keeping Great Britain in the War. He was then transferred to England where he was prepared for the D-Day invasion in June 1944 and assigned to Patton's Army. He went in on the second wave at Normandy, participated in the Liberation of Paris, actions in Luxembourger, Belgium, The Battle of the Bulge, and Germany; even participating in Patton's "Lost " raid into Czechoslovakia that Patton staged to try to push the American line as far East as possible. He was discharged as a technical Sargent and platoon leader with two purple hearts and a bronze star. He arrived in New York aboard the Queen Mary and, once the ship docked, he removed the steel helmet he had worn all the way through Europe and threw it into the ocean saying, "I"ll never need you again." He refused to leave the continental United States for the rest of his long life, saying that he had left nothing "over there" that he had to go back to find.

Picture 3: Floyd (in the middle) being harassed by his younger, and lower ranking, brothers. Arrena Davis sent all four of her sons to the army in World War II and was fortunate enough to have all four returned to her, although some were wounded. 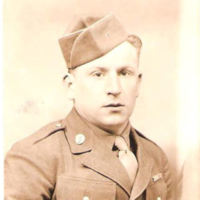 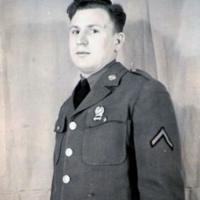 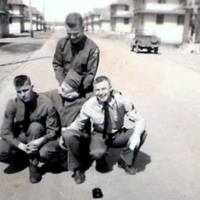